Before continuing reading this update on our ongoing project Drama for Youth Work (DYW), it's suggested to read the introductery article on the first multiplier event concerning DYW.
The article can be found here: https://www.onoffteatro.com/2020/01/dyw-symposium.html 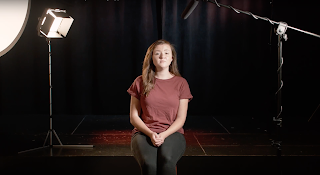 Our project DYW, with the objective of creating 45 video tutorials to learn how to use theatrical activities for the treatment of social issues, is now almost completed. Most videos are uploaded by now and can be found on our youtube channel "Drama for Youth Work". So, what was the process like and which steps did we take to realize this Erasmus+ funded project with our international partners?

First, in February 2019 (2-6) twelve representatives of our partner entities Crooked House (Ireland) and Biondek Bühne (Austria) came to Logroño, La Rioja for a Training Course.
The objective was to further plan the steps of the project, to distribute tasks and to organize the communication and visibility strategy. This includes talking about deadlines and the exact outlook of the videos.

The outcome of the training was for once the agreement on creating new innovative methods joining theatre and social inclusion together in a way so that anyone working with young people can include these exercises into their program. Topics and targeted results were decided on. DYW would be focusing on important social topics such as gender equality, interculturality, active citizenship and human rights. As a result of this project we ideally would've create both videos and a manual with more than 40 activities, theoretical instructions to each of the topics, guidelines and advice on how to use theatre as a tool for working with young people.

It was also decided upon additional meetings in the future to discuss the progress and schedule of the project.

The first week of May 2019 some members of ON&OFF came together in the premises of Dinámica Teatral for the 'DYW Rolling'. The objective was recording all 15 videos corresponding with the topics Interculturality, Disability and Social Exclusion to fulfill their part of the project.


In preparation we had called on all members to participate in the filming of the videos corresponding to the pilot phase to generate audiovisual intellectual products.
Silvia Saénz García created the activities to be filmed and ten young people followed the call and took part in the workshop.
As a result the videos were obtained and uploaded but remained unpublished for the time being.

Of course the functionality and clearness of instruction in all of the videos had to be tested before releasing them for the world to see. That's why there was another event from the 28th of October to the 2nd of November in Newbridge, Ireland with that objective.

We wanted to test the project activities with professional trainers who work with youth groups without theatrical experience to be able to plan the next steps of the project and to specify deadlines for the remaining work.

This training course that was part of the KA2 - Drama For Youth Work, was developed in Newbridge. Using the facilities of Crooked House, each trainer had to watch some video tutorials and give a workshop with what he/she had understood from the material. In the following days after that we worked on planning the future actions of the project. 15 participants from the three partner entities ON&OFF, Crooked House and Biondek Bühne took part in this event.

This is it for the update on DYW. As stated in the beginning we're right now in the process of uploading the videos and we're still working on creating additional material and guides.


You can find more information about the project at https://dramaforyouthwork.com/ and of course you can already profit from the videos on youtube:
https://www.youtube.com/channel/UC_o52I0LKsCSs48hQfpOIBg/featured 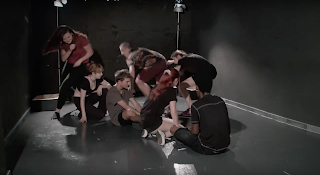 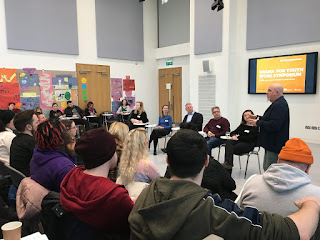